Pakistan won by 6 wkts against Australia in the 2nd ODI at Lahore and levelled the series 1-1. It was Pakistan's most succesful chase in ODI history as they chased down 349 runs on the backdrop of a scintillating Babar Azam Century. Babar scored 113 at a SR of 137 after a well set platform by Imam and Fakhar. Imam Ul Haq registered his 2nd consecutive 100 and became the the fastest batsman to score 9 ODI 100s. This was the 8th time when Pakistan chased a total over 300 in ODIs.
Going into the 3rd ODI, Pak will be under pressure again. They lost a series against a depleted Eng side and now are on the verge of losing another one against a depleted Aus squad.

This series is important for both teams considering their positions in the Super leage table. Pakistan are at 8  while Australia are placed at 4. Pakistan's position is mainly due to their 3-0 loss in England. In absence of many star players, This series is turning out to be a great opportunity for so many youngsters in the Australian squad especially Ben McDermott, Nathan Ellis and Cameroon Green. The hosts too have given the likes of Khushdil Shah, Saud Shakeel an opportunity in all the 3 odis. With the Pandemic and 2 back to back t20 world cups scheduled, ODIs have been highly neglected. Australia have played only 5 Odis since the start of 2021 whereas Pakistan have played just 8.

Steve Smith has pulled out of the limited overs leg to give his right elbow a rest. Mitchell Marsh has sustained a hip flexor injury and is probably out of the series. Josh Inglis and Ashton Agar have tested positive for covid and will isolate for 5 days. Matt Renshaw is flying in to join the squad.

Babar Azam: The Pakistan skipper won the ICC ODI player of the year award. He now averages 57.72 in ODIS and became the quickest to 15 ODI centuries reaching the milestone in 83 innings. He also became the fastest to 4000 ODI runs in just 82 innings

Imam Ul Haq: He became the 5th fastest batsman to reach the milestone of 2000 runs and became the fastest to 9 ODI 100s. This was his 4th international 100 in March.

Shaheen Afridi: The ICC cricketer of the year award winner has 57 wickets in the format in just 28 innings, thats more than 2 wickets every game.

Aaron Finch: He is the most experienced batter in the line up with over 5000 runs and 17 centuries. Finch is the 5th fastest batter to score 17 100s. Pakistan Finch's favoirite opponents. He has scored 567 runs against them with 3 100s and 53 average. Finch scored 2 100s against them in the last ODI series before 2019 WC and won the series 5-0.

Ben McDermott: He had a record breaking BBL season with 577 runs – the 4th highest single season tally in BBL history - at 48.08 average and a strike rate of 153.86, despite missing the first two games of the season. McDermott made the most of the opportunity in 2nd ODI, as he scored his maiden ODI 100.

Adam Zampa:  The most experienced bowler in the bowling department and one of the world's leading leg spinners. Zampa has taken 43 wkts in his last 22 innings at an eco of 5.4

Travis Head: In absence of Warner and Finch not firing at the top, the man of the series of ashes has handled the new responsibility at the top well. He scored a 100 and backed it up with a 89 in the 2nd ODI. His SR in the series is 133. 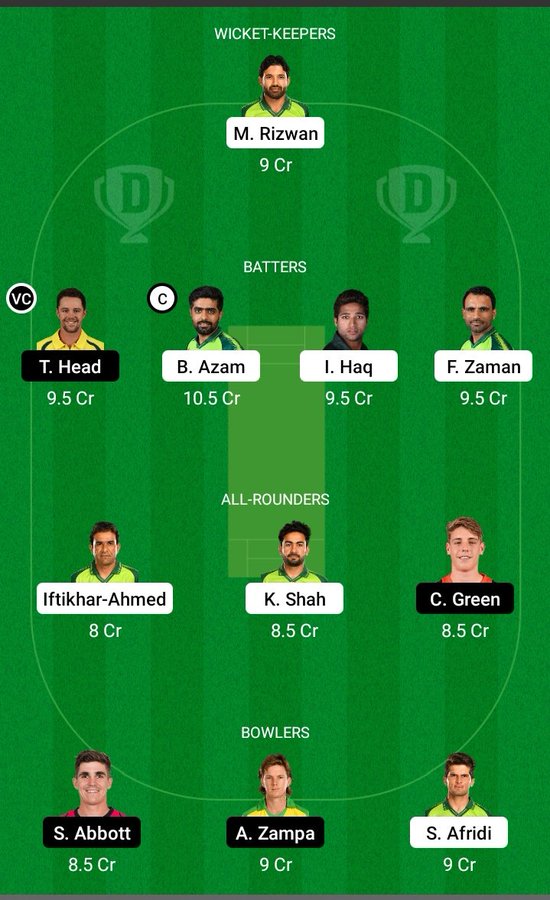