Declared as one of the weakest teams after auctions,  GT have silenced every critic by being the table toppers and then rampaging their way into the finals  beating RR by 7 wkts.  Skipper Hardik Pandya has led from the front in both the departments though his SR this season (133) is much lower than his career SR of 148. Rashid Khan just like every year, has taken more than 15 wkts at an eco of less than 7. Mohammad Shami repeated the same feat by taking having another 15+ wkt season for the 4th consecutive time. Only complaints about the GT squad would be benching Rahmanullah Gurbaz the hard hitting wk batter from Afghanistan in place of Matthew Wade and dropping Abhinav Manohar

They decided to do away with 4 pacer strategy & have given opportunity to TN sall rounder R sai Kishore who hasn't dissapointed so far.  GT had one major chink in their armour and that was the top 3.  Shubhman Gill had played 2 big knocks but went through a string of low scores. They had hit only one six in the Powerplay till the 5th game. With the inclusion of Saha, their Powerplay game has improved massively and he has notched up 212 runs at 136 sr.  Game after game GT have been exceptional under pressure in chases. The trio of Tewatia, Miller and Rashid deserve a whole lot of credit.

Rajasthan Royals have tasted massive succes inspite of fileding a weak batting line up with a long tail. Majority of the success goes to Jos Buttler who has notched up 824 runs at a SR of 151. If RR bat 1st, he holds one end and bats through the innings. If RR are chasing, he breaks the game in Powerplay itself. Before playoffs he suffered a dip in form which was inevitable and expecting the same from him for the duration of the league stage is foolish. There has been an encouraging development for RR in the last few innings when Jaiswal or Padikkal have each contributed. Padikkal has scored 227 runs in middle overs at s SR of 140 and Jaiswal has put up 212 runs in his last 6 innings. Perhaps, RR's unsung hero has been Shimron Hetmyer. He has been the leagues's best batsman in end overs. Since 2021, he has scored 343 runs at a SR of 207 and this year he has scored 210 runs at a SR of 214.

Both teams have met twice in the season. GT won in the league stage by 37 runs and beat them in the 1st eliminator by 7 wkts.

Jos Buttler: Since 2018, Butler strikes at 144 in the Powerplay at an average of 52.3 with 994 runs. Regarded as one of the most dangerous white ball batters in the world, he had a brilliant t20 wc where he scored a scintillating 100 against SL on a slow Sharjah Pitch and carried his form in the IPL where he scored another 100 in his 2nd game of the season, a 70 odd in the game vs RCB and a quickfire 50 in the powerplay against GT, and another 2 100s against KKR & DC. He is the orange cap holder with 824 runs and has hit 45 sixes after a yet another 100 in Q2 against RCB.

Yuzvendra Chahal: He is on the cusp of winning the purple cap with 26  wkts at an eco of  7.9 and holds the record of most wkts by a spinner in a season along with Hasaranga. The spin duo of Ashwin & Chahal have been RR's biggest strength in the middle overs. Chahal has taken 19 wkts in the middle overs . RR have been using him wisely by bowling his 2 overs after the 14th over. He bowled brilliantly in the end overs of few games and has scalped 7 wkts.

Rashid Khan: It was about time for Rashid to show what he is capable to do with the bat. He was the stand in captain in the game against CSK and displayed his batting prowess while chasing and scored 40 off 21 balls. He again did what he has been doing in leagues like BBL and PSL all these years and smashed 31 of 11 deliveries to take GT to a memorable victory against SRH.  18 wkts at an eco of 6.7 are his stats in this season. Rashid has never finished a season with an eco of greater than 7 and became the 1st spinner to take 15 + wkts in 6 consecutive seasons. He has a good h2h record against Buttler and Padikkal.

Mohammad Shami: He has taken 15+ wickets in consecutive seasons since 2019. 19 wkts at 8 eco are his numbers in this season.

Sanju Samson has scored 444 runs at a SR of 146.7. He has hit the most sixes against spin in this season after Jos Buttler. Since 2020, Samson has scored the most runs in middle overs ( 881 ) at a SR of 154.5. After getting dropped from the t20i squad vs SA, Samson must be itching to play a match defining innings and take RR to the glory. 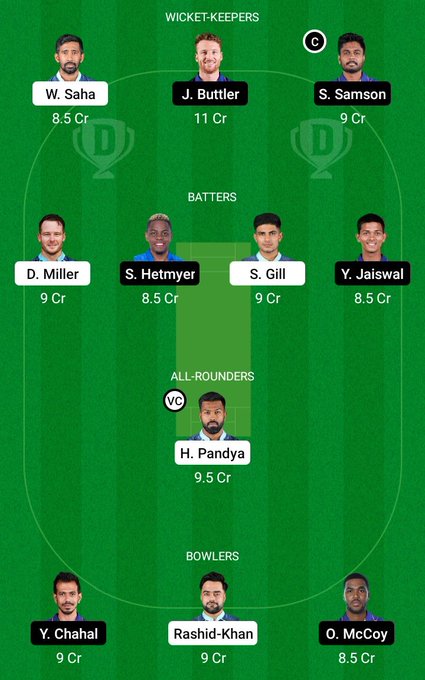