A 24-year hiatus has come to an end as Australia are set to play in Pakistan for the first time since 1998. The visitors will play 3 Tests, 3 ODIs and a one off T20. It's expected to be a thriller of a series since for the first time in many years both teams are evenly matched and some crucial WTC points are at stake. Encounters between both sides in the longest format have been fairly one sided for a while with Australia dominating almost every series without breaking a sweat. Since the turn of the century, Pakistan have just managed to win 2 series against Australia, while Aussies have won 6 series if we include the 1999 tour down under. However, hosts have been dominant in UAE with a series whitewash in 2014 and a 1-0 in in 2018.

The visitors are coming into the series with a big 4-0 Ashes win at home. Usman Khawaja, Travis Head and Scott Boland have been their biggest positives. Khawaja's twin hundreds at SCG sealed his spot in the side and with Harris repeatedly failing it became clearer that Usman will open henceforth. Khawaja's 141 in UAE was the highest 4th innings score by a visiting batter in the subcontinent at the time. Another problem ailing Australia along with opening was the no. 5 spot or the lower middle order. It played huge role in the series loss against India. They have clarity on who is their 2nd opener and their no. 5 which is a big plus point. Travis Head grabbed his opportunities with both hand and was Man of the Series in the Ashes.

Australia's record in the subcontinent has been abysmal for a while. In the last cycle they lost 2-0 in UAE, 3-0 in Sri Lanka, 2-1 in India and drew 1-1 in Bangladesh. If they need to have any chance of playing in the WTC finals then they have to up their game in these conditions since they are scheduled to tour Sri Lanka and India in the next 10-12 months. PAK's chances in the WTC have taken a hit with their drawn series in West Indies. They host England and New Zealand at home in this cycle.

Both teams are coming into the 1st Test underprepared. Pakistan hardly got any time with PSL ending just 5 days before the 1st Test. Injuries are not helping their cause either. All-rounder Faheem Ashraf and fast bowler Hasan Ali won't be available. They are replaced by Ifthikar Anjum and and Mohammad Wasim Jnr.
Opener Abid Ali has been diagnosed with a heart problem and will be out of the action for some time. Haris Rauf has got COVID and Naseem Shah has been added to squad. Australia, on the other hand, have no such casualties and instead have few selection headaches. Lyon expects the pitch to assist the spinners as the game progresses hence it will be a tough choice for the management to choose either Starc or Boland as the 3rd pacer or to select Agar or Swepson as the 2nd spinner to partner Lyon. Pakistan have only one choice to make to play either play Iftikhar or go with an extra pacer.

David Warner: Pakistan has always been Warner's favourite opponents. From being a standout performer in the UAE 7 years ago to scoring his maiden triple ton, he has feasted on their bowling attack every single time. His 100 at SCG in one session in 2017 is just an example how he can set the game for his team. 335*, 154, 55, 113, 144 are his last 5 innings against the hosts. He averages a mamoth 108 in just 11 innings at an SR of almost 80

Marnun Labuschagne: The world no. 1 batsman will set his foot outside Australia for the first time since 2019 Ashes where he averaged 50 in 7 innings. He made his debut against Pakistan in UAE where he could manage only 80 odd runs in both tests. But that outing wasn't a failure. He shone with the ball and picked up 7 wkts at an average of 22. Pakistan was his 1st assignment at home since establishing himself at 3 in Ashes. He scored 347 runs with 2 centuries.

Nathan Lyon: "My mindset is to play here in Pakistan and win 3-0". these are the exact words of Nathan Lyon ahead of the series. Right from his debut in Sri Lanka in 2011 to Pakistan in 2022, Lyon has been the lead spinner of the side and carried the
bowling attack on many occasions. He has 95 wickets in the subcontinent with 7 5-wicket hauls but his average is slightly on the higher side- 31. Last UAE tour was a major dissapointment for him.

Shaheen Afridi: Hasan Ali's absence is a huge blow for the hosts. In the last 1 year the duo of Shaheen and Hasan are skittling opposition line ups left and right. Shaheen has scalped 47 wickets at an avg of 17 and SR of 37, whereas Hasan Ali has taken 41 wickets at an average of 16 and an SR of 31.

Fawad Alam: Its a saying that you never write off anyone in sports and Fawad Alam is its perfect exmaple. Out of favour for almost a decade, Alam just didn't knock on the selection door, he kicked it with his consistent FC record. Since his comeback, he has scored 4 tons, all against different opposition with 703 runs while averaging 50. He is the backbone of Pakistan's batting line up at 5.

Azhar Ali: If there are any major concerns in this side, it is the opening. Abid Ali is out because of a heart ailment and Abdullah Shafique is just a series old in International cricket. Imam Ul Haq and Shan Masood are making their comebacks after a long time. Babar's run in Test cricket has been a little patchy in the last 2 years. He is averaging 38 which is on the lower side by his standards. That makes Azhar Ali's role very crucial in the side at no 3. Cummins and Hazlewood are not going to make their top order's job easy either. 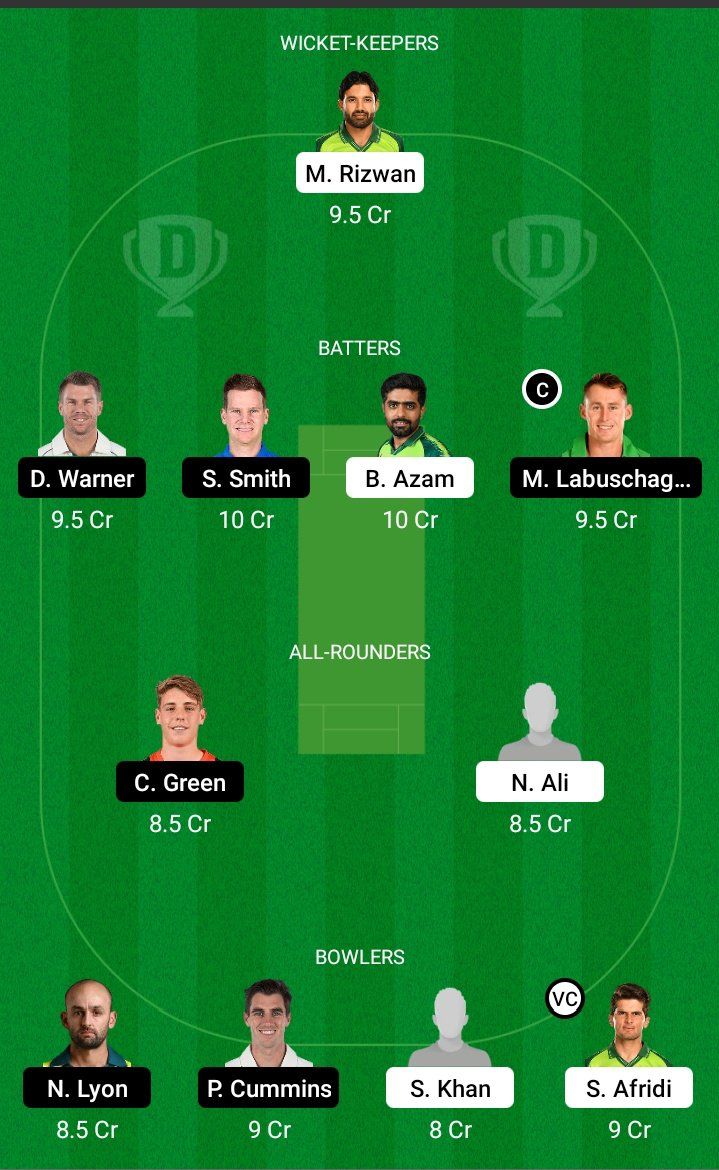